Training on all stages of the University’s recruitment and selection process, and how the eRecruitment system Stonefish has been adopted and integrated to support stages 3-6:

The training also demonstrated the process for applicants and explained how this has been significantly improved by, for example, allowing people to store details for future applications. 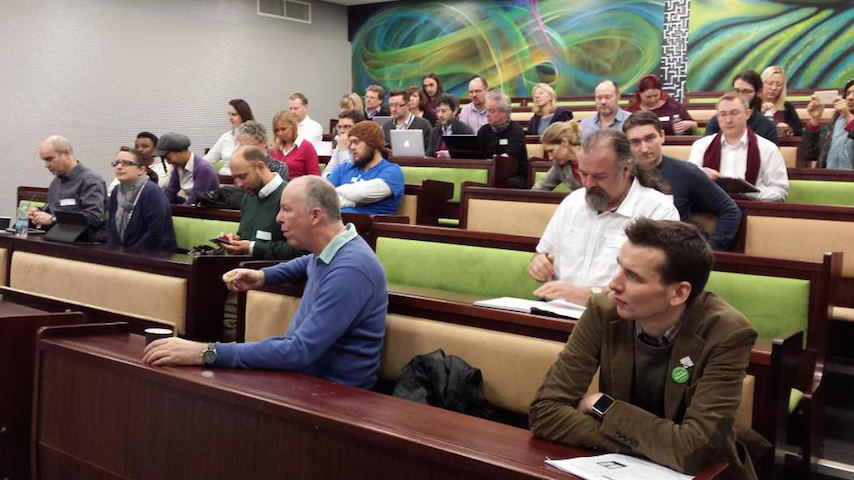 Attended a special meeting of the White Rose Learning Technologists Forum at the University of Sheffield which was opened up beyond Yorkshire for a themed event on learning analytics.

The principal speaker was Martin Hawksey who gave a dense and extremely informative presentation which explored the history of learning analytics, methodology, available tools, threats and opportunities. He then introduced us to two tools for social network analysis, TAGS which archives and analyses Twitter hashtag searches, and NodeXL which has similar functionality but which requires less technical knowledge to set up and can import data from other social networks including YouTube and FaceBook. Martin has written a blog post about his presentation which is available here and the presentation itself can be found here.

Martin was followed by Patrick Lynch from the University of Hull who gave a talk about his work and experience with learning analytics using Excel and Tableau, a more powerful tool for analytics analysis. Patrick also talked about his experience with issues of privacy and ethics which he found varied wildly among students, with some fearing Big Brother while others found the analytics extremely helpful in informing their own learning, and shared other lessons learned such as the fact that you cannot necessarily infer meaning from action. The example he gave was of a report which identified students who had not accessed certain content items at the expected times, but investigation found that in some cases this was because they had downloaded the entire course content at the start of the course.

Finally, Jamie Lepiorz from the English department at the University of Sheffield talked about his experience of using analytics and student feedback to inform the development of the Animals in Film Archive and related module.

Photo is courtesy of Danny Monaghan. More photos and Tweets are available from the #WRLTF hashtag on Twitter.

Today I installed the latest technical preview of Windows 10 on a VM and had an initial poke about. Set up and installation was very easy, once I figured out you had to select ‘Windows 8.1’ in VirtualBox rather than ‘Windows Other’. I’ve used beta versions and previews of Windows for a while now, since Windows 7, but this is the first that really feels like beta software. All of the others have been nearly there, and certainly usable, but Windows 10 is full of bugs and stuttering. You definitely cannot use it in anger at this time.

However, it does look and feel pretty good for the most part, a nice incremental update on Windows 8 which works a lot better on the desktop. I would have liked to have seen Continum in action, the feature for tablets which toggles on-the-fly certain features based on whether or not a keyboard is detected or there is some other indication of a change from tablet to laptop mode. Not possible in a VM for obvious reasons, and I don’t have a spare Windows tablet lying around which I could get away with breaking.

Virtual desktops are nice, but long overdue. But I would say that wouldn’t I? I’ve been in love with Spaces on Mac OS X since Leopard in 2009, and I can remember using virtual desktops on Linux back in the early naughties when I had a piece of crap Compaq than came with the abominable Windows 98.

The new Start menu with integrated tiles is also very nice, as is the way TIFKAM* apps work in windows mode now, much more natural and consistent.

Some more details on TechRadar:

* The Interface Formerly Known as Metro. Modern UI just doesn’t have the same ring to it.

The Terrible Itch That Can’t be Scratched

It’s been a while since my last post, first of the new year actually (so Happy New Year folks!) so I thought I would post something quickly on what I’ve been up to.

The reason for the lack of blogging is simply because I haven’t actually finished anything! I’ve done plenty of work, but for various reasons nothing is in a state where I can declare it to be done. Frightfully frustrating for someone with a little OCD.

One thing I did finish was a training event which I delivered for Careers, on Prezi, which I really enjoyed and I received some really nice feedback from them. I’ve also acquired a Thunderbolt to HDMI adaptor to get the Oculus Rift hooked up to one of our Macs, but haven’t had time to get it set up yet. I have nearly completed two Storyline presentations, a very comprehensive learning unit on the Bribery Act which will be the largest and richest piece of learning material I will have produced to date, and another short video for Careers. Both of these are with their respective project owners at the moment for approval and feedback. Prep work for the second semester of Technology Bytes is well under way, but again not quite finished yet due to a room booking problem, and finally I have had a very productive meeting with an academic today about developing a progress bar widget to use in course sites, similar to what Future Learn have. It will be tricker for us to implement as it will need to be dynamic to accommodate changes to course materials as time goes on, but not an insurmountable challenge.