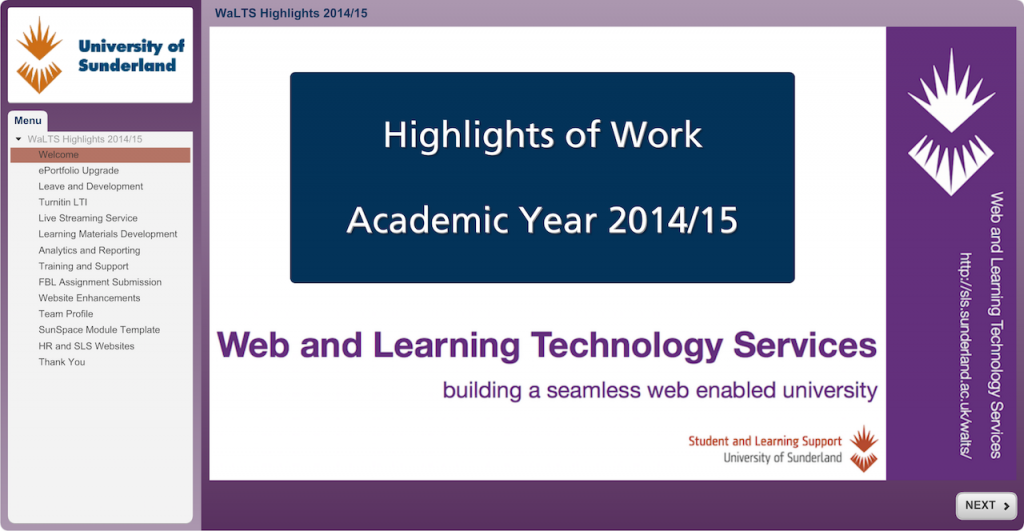 For the University Library’s SMT meeting this morning I was asked to deliver a short 30 minute talk about the work and accomplishments of the team over the past year, and to look forward to what is coming for us next year. Notes and thoughts which I started putting together yesterday morning morphed into the presentation below which was very well received. Indeed, I ended up talking for around an hour thanks to a really good Q&A session. Many people at the meeting have asked to either disseminate this presentation to their colleagues or for me to attend other meetings to deliver this again. That’s a very satisfying feeling, a job well done. Following this reception I have gone on to publish the presentation on our website and on a ‘Show and Tell’ module on SunSpace that we use for this kind of thing.

One of the big projects I picked up last year when I started at Sunderland was the team’s development of a new way of accessing Turnitin through SunSpace. Following the successful implementation of the LTI earlier this year I wrote a case study about our experience which has now been published to our website.

This is the first of what I hope will be many case studies sharing our experience for the benefit of others and publicising the good work we do.

Why, hello there old friend! It’s been a while has it not?

I’m working with an academic on developing a course which she wants to deliver as a MOOC and part of my role has been to find the right platform for her. We can’t easily do anything in the University’s VLE, and Sunderland has not yet partnered with any of the big MOOC providers such as FutureLearn, so I have been investigating two free options, OpenClass from Pearson and CourseSites from Blackboard.

OpenClass has the advantage of being from the same codebase as LearningStudio making it easy for our academics to use and it should provide a pretty smooth transition for students who complete the MOOC and go on to enrol on the next level at the University (the proposed model). OpenClass, however, is no longer under active development by Pearson and so it’s future is shaky.

CourseSites is provided by Blackboard on a similar model. It is freely available for anyone to use and they can have up to five courses running simultaneously with unlimited numbers of students. This is not an exaggeration: in less than a minute of setting up my account on CourseSites I hit this error! I suspect it was just a case of things taking a little while to be created in the background, but it made me laugh as my life at Northumbria was plagued by such errors. I haven’t seen one in nearly a year and within a minute of using Blackboard again I got one straight off the bat.

On a serious note though, it does go to show that all platforms have their problems and idiosyncrasies, and that there is no perfect solution. Easy to forget that sometimes.

UPDATE: I never even had time to post this before learning that Blackboard are in the process of migrating CourseSites to their new MOOC platform, Open Education. I haven’t signed up to this one yet as it would appear to be a little more formal and I would need to sign up the University as an institutional partner, something I need to run up the flagpole first. I can’t see it being much different though, Blackboard is Blackboard, and CourseSites will serve in the interim to start development.

It was my intern’s last day today. I say my intern, he was the team’s intern of course, but I hired him and he was the first person I was fully responsible for line managing so I’m claiming him as my own, and today I feel a bit like I imagine a parent must feel when their offspring leave the nest, a mixture of sadness and pride. Mike was a great asset to the team and will be sorely missed, but he’s going to a better place!