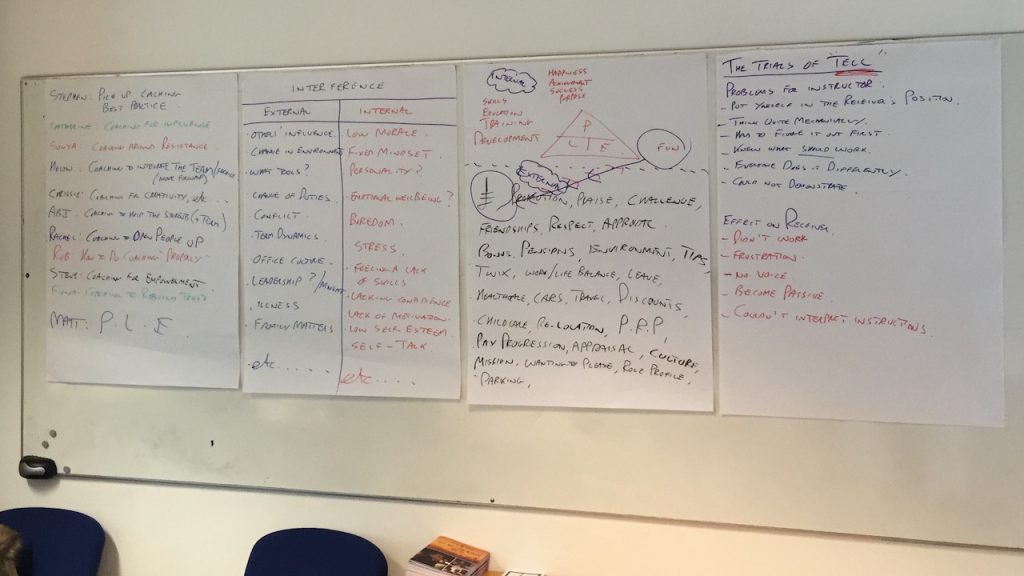 The first of a three day ‘mini-course’ within the module devoted to coaching. Today was all about coaching theory, tomorrow will be practical application, and then in around a month there will be a third day covering how you have implemented coaching in the real world and how to coach teams rather than individuals.

These sessions are being delivered by an external consultant, Matt Somers, who’s coaching model is based on the work of Tim Gallwey who’s work includes The Inner Game of Tennis which Matt recommended in particular for follow-up reading.

The day began with an exploration of what we each wanted to get out of the coaching sessions, and our collected responses can be seen in the first piece of flip chart paper in the attached photo. What I wanted to gain was to learn how to apply the principles of coaching in situations where people and teams are likely to be resistant, to coaching specifically but to any kind of change in general.

Next was the day’s first exercise and demonstration of the power of coaching. Standing in a circle we had to toss a ball between us, recording how long it took to do so. On our first attempt we did it in 20.1 seconds. Matt then asked us how we could do it in half the time. There were many iterations, and eventually we go it down to an incredible 0.15 seconds – I won’t tell you how, spoilers. The point of the exercise is that after each iteration we all thought we had done pretty well and, after the first two or three rounds, that we couldn’t possibly improve further, but by making us think about how we could half the time, instead of telling us to do so, or that it can be done, or other teams have done it faster, Matt was coaching us to push ourselves, to find our own solutions.

And that is the crux of coaching. It is about drawing people out, releasing potential, helping them to learn as opposed to teaching, training or counselling them. The role of the coach is to ask the right questions, to help motivate people and to remove internal barriers to success – internal interference as identified in the second piece of flip chart paper in the photo. These are factors such as low morale, a fixed mind-set, boredom, stress, low self-esteem, etc. There are also external factors of interference which a coach may not be able to do anything about, such as the influence of others, conflict, office culture and family problems.

Another important factor for success we discussed was motivation, and the importance of motivation in getting people to perform at a consistently high level. We identified three broad categories of motivator – performance, learning and enjoyment – which are distinct from routine day-to-day things such as salary, benefits or job security. What these three factors of motivation have in common is that they are largely internal, and thus can be developed with the help of coaching.

The day ended with another couple of exercises. ‘The Trials of Tell’ was designed to show the limitations of an instructive or commanding style by having one partner in a pair imagine themselves to be an alien who, lying flat on the floor, had no concept of the ability to stand, while the second partner had to instruct them on how to do so. The second exercise contrasted this by having someone who self-identified as clumsy and unable to catch a ball consistently, doing exactly that, with the aid of being peppered with coaching style questions as they were tossing the ball back and forth between themselves and Matt. Instead of commanding ‘Watch the ball’, asking closed questions, ‘Are you watching the ball?’, or asking interrogative questions, ‘Why aren’t you watching the ball?’, Matt started by asking ‘What do you notice about the ball?’ and then followed up with questions about the ball and exercise which were related to the catcher’s responses. In doing so Matt demonstrated two things, firstly the power of using questions as an effective means of getting people to think, rather than giving instructions, and secondly the nature of coaching questions: that they should be open and not closed, start off broad and then get narrower, follow the interests of the person being coached, and use their own words and responses in your follow-up questions to show that you are actively listening and engaging with them.

Finally, I’ll end this post with a couple of random quotes from the session. These are not Matt’s, but axioms he has picked up over his years as a coach and isn’t sure who to attribute them to:

"Learning is easier than being taught."