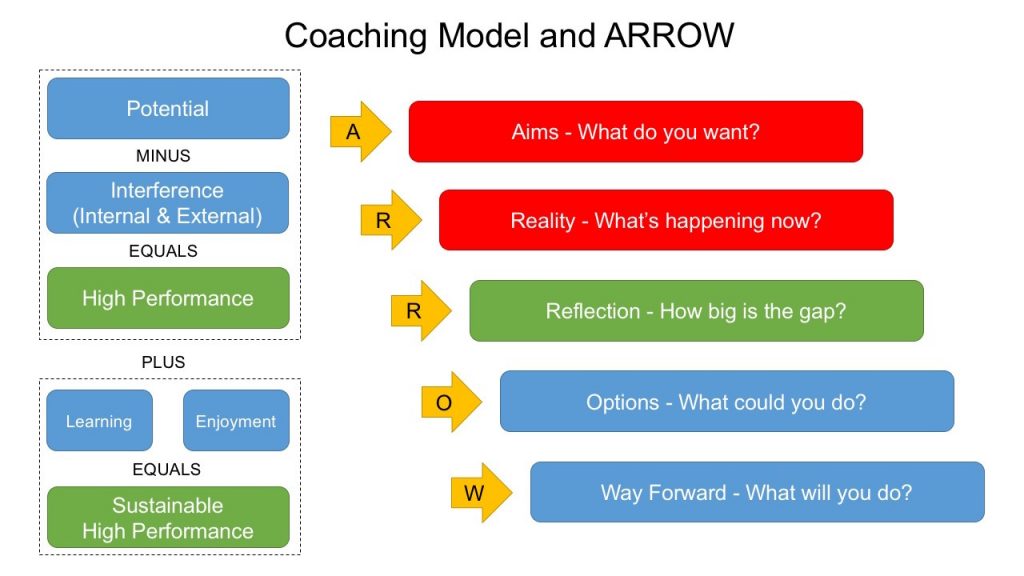 Day 2 of Coaching at Work was about filling out some of the principles introduced to us yesterday, followed by some practical application in a safe and supported environment.

Matt’s completed coaching model takes the form of an equation, Potential minus Interference (both internal and external) equals High Performance; add in Learning and Enjoyment for Sustainable High Performance.

Following a discussion on the purpose of coaching which served as a recap, the conclusion of which was that coaching aims to move people from vague desires to meaningful action, Matt gave us the ARROW model of questioning which consists of five steps, or categories of question:

For each of these steps Matt gave us around 6 to 8 example questions which break them down into more detail, and some advice. Possibly the most important being not to stick to the model literally, as people don’t think in a straight line and can jump around the steps in the model. Reality is the most important step according to Matt, as it can take people some time to work out what the situation is actually like, and also possibly the most tricky. We were warned about one question in particular from the examples in this section, namely ‘How does this make you feel?’, which has the potential to be upsetting for some in certain situations. For the Options section answers don’t have to be realistic or even necessarily desirable, the purpose here is to generate many and creative answers which are hashed out during the final step, the Way Forward. What all coaching questions need to have, and which the given examples have been designed to provide us, is the quality of compelling the person being coached to focus and provide more detailed answers than to ordinary questions in another context.

After our work on the ARROW model we broke up into groups of three and practiced coaching on each other, using some prepared live work issues we were asked to think about prior to these coaching days.

We ended the day by reflecting on the qualities of an effective coach and getting some more tips from Matt which included the three principles of coaching:

Regarding awareness, we had an aside on active listening with advice which included showing an interest, avoiding interruptions, removing distractions and making good eye contact. All of which are designed to show that you are listening.

Next steps after today are to try and put it all into practice in our own teams before the final coaching day in around a month’s time, and to read some of the follow-up articles and documentation which Matt has provided.