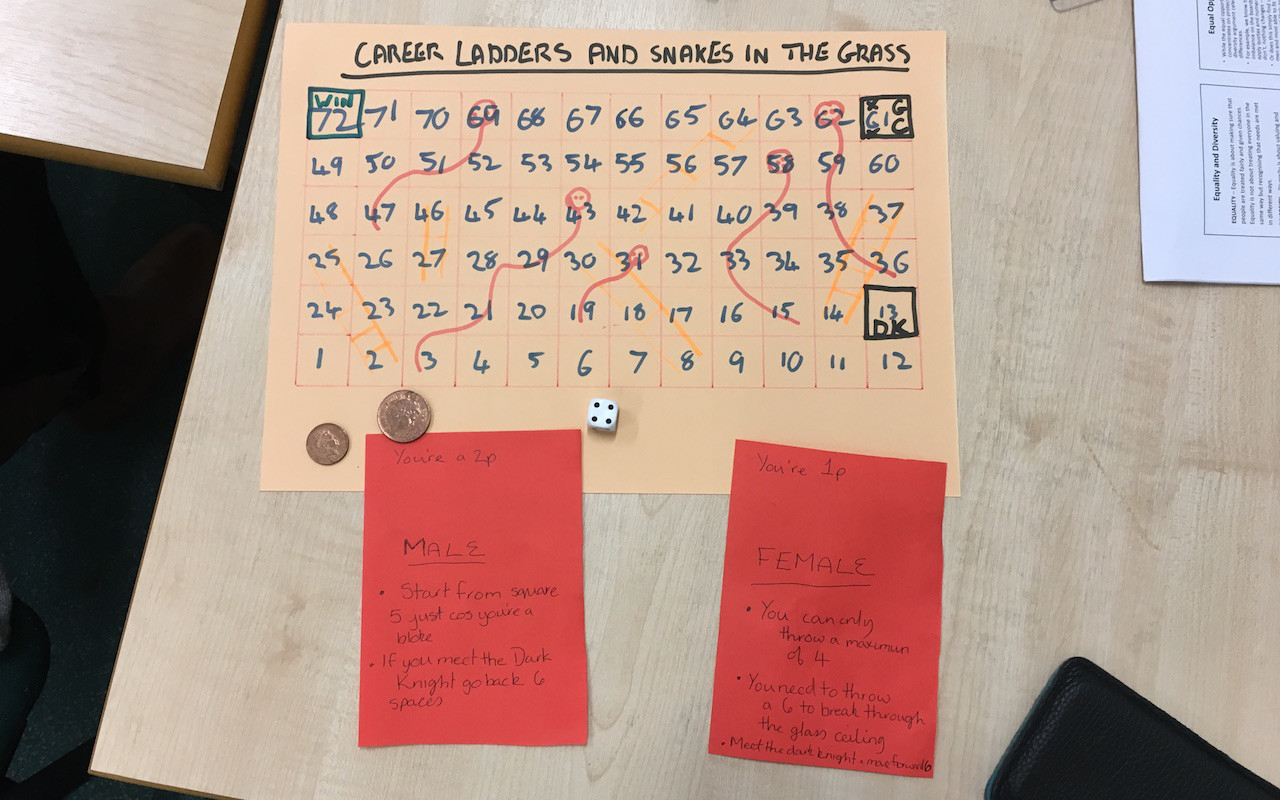 The penultimate session of the course began with a fairly cringe-worthy ice-breaker exercise in which we were tasked with matching some very diverse faces with names and occupations. Knowing the nature of the session we were naturally at pains not to apply stereotypes, placing us in a situation of double and triple guessing ourselves, rendering the exercise somewhat moot. Thankfully it didn’t take too long before we moved on.

The session was delivered by a guest academic who has spent their career researching gender equality and she gave us a brief history of her work which includes a chapter in the forthcoming Re-reading Spare Rib. Recommended further reading included When Giants Learn To Dance and A Tale of O – A story on Diversity.

We then discussed the problems of stereotyping and how gendered language can disadvantage women in business. For example, describing leaders as ‘self-confident, assertive and inspirational’ is problematic as these attributes do not match gender stereotypes of women as ‘nice, friendly and sensitive’, but do match male stereotypes such as ‘dominant, assertive and forceful’, with the potential result being lowered evaluations of women as leaders.

This led on to a discussion of bias, the inclination towards or prejudices for or against something, both explicit and unconscious. This isn’t necessarily negative as it allows our brains to make quick decisions based on prior knowledge and experience, but it is important to be aware that we have them. An example of research in this area was provided that showed racial discrimination in the interview selection process by submitting identical CVs with different names on them, those with a ‘white sounding name’ were almost a third more likely to be selected for interview.

Some advice was given on how to mitigate the effects of organisational bias, including first of all being aware of one’s own and organisational biases, sifting CVs blindly looking at content only, being careful with the use of gendered language in adverts and descriptions, and using aggregate scoring in selection. We also covered equality and diversity legislation, including the nine protected characteristics.

A task we were given to assess our own biases was to take one or two Implicit Association Tests. I took two tests which is both cases showed that I had a moderate bias towards one particular side. In the ‘Countries’ test, for example, it was revealed that I had a slight preference towards the UK over the US. I’m not quite sure how valuable this exercise was. This outcome struck me as unexpected and logical, given that I have lived in the UK all of my life and was therefore able to more quickly recognise those statements and things which pertained to the UK than the US.

Finally, in the latter half of the afternoon we were split into two teams and pitted against each other to design a game of some kind that would teach colleagues something about equality and diversity. My team came up with ‘Career Ladders and Snakes in the Grass’, a variant of snakes and ladders but with different rules for men and women. If you draw the male card you get a head start, draw the female card and you can only roll a maximum of four, both rules designed to show how much harder women have to work to get ahead. There were a couple of special themed squares on the board. The Glass Ceiling square towards the top of the board which, if you land on while playing the female card you get stuck on until you roll a six to break through the ceiling, and the Dark Knight square, the full meaning of which I couldn’t possibly explain here as it is a little bit of black humour relating to something that has been happening here at Sunderland as part of the review of staff.

We played each other’s games and I’ve had my own team play ‘Career Ladders and Snakes in the Grass’ and, interestingly, in both cases the person who drew the female card won! Also in both cases the female card was drawn by men who were very annoyed when the rules were explained to them on the grounds that it was unfair, which of course was exactly the desired reaction. The other team’s game was a variant of Trivial Pursuit with the questions relating to equality and diversity issues. We won. Our game was declared the best and most fun. Not that I’m competitive at all.