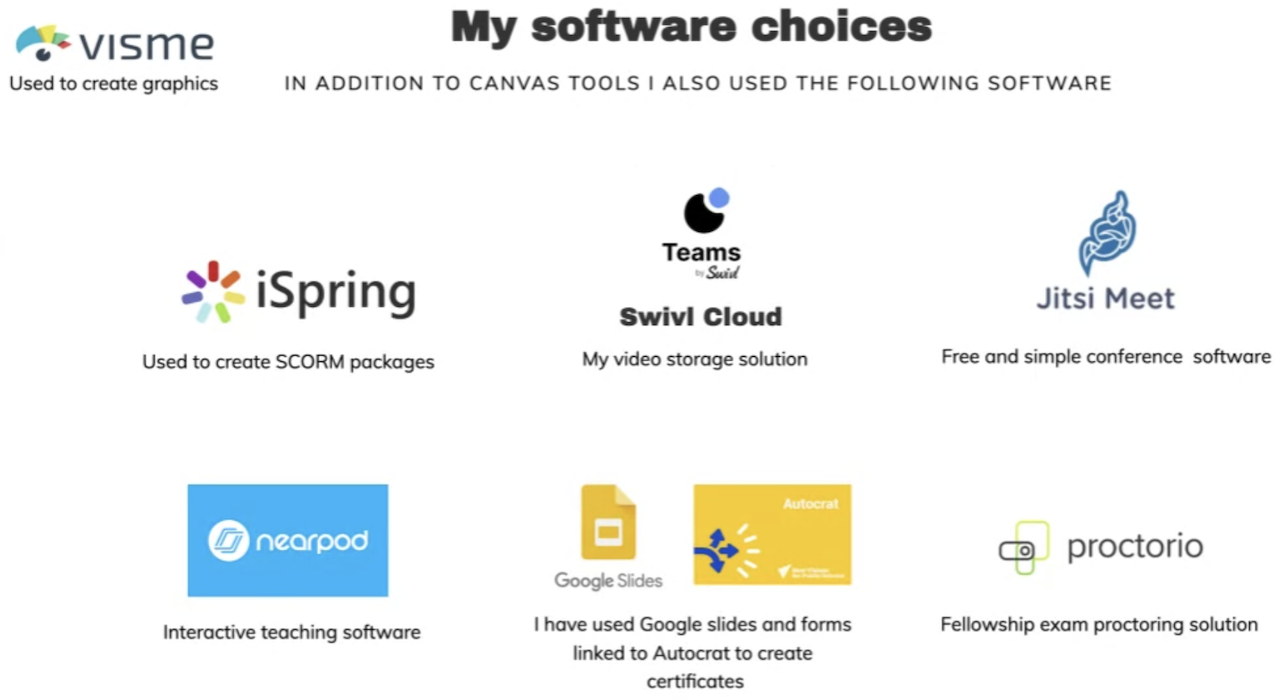 A selection of the software used for the project

Attended this ALSIG webinar on ‘Transforming a website of resources to a learning suite (lessons learned!)’, a case study from Ian Miller on converting a website which had become home to a collection of static learning resources into an online learning platform using Canvas and a number of open source and freemium online learning tools, many of which are shown in the screenshot above.

iSpring is a package I’ve never used but know well as a colleague was an advocate for it. Swivl Cloud was new to me, a video hosting service similar to Panopto, as was Jitsi Meet, a Teams / Zoom alternative. Nearpod, Google Slides and Proctorio are all known quantities.

This project was for a non-profit organisation called IACLE, the International Association of Contact Lens Educators, and one of the hard lessons learned was on how Canvas counts active students which forms the basis of their pricing. Other challenges included how to convert large, static PowerPoints into interactive learning objects (a pain I suspect we all know), and sourcing high quality, free to use tools to complement Canvas, though Ian reflected on the joy and satisfaction of being given a very free hand in this project.

As a result of a mini restructure in the CELT my job, the Senior Learning Technologist, will cease to exist in a few weeks. That was a little disconcerting when I found out, but I am thankful to have been slotted into a new role in the new structure at the same grade, so on the 1st of August I will become the new Learning Technology Coordinator for Learning Materials Development. Longest. Job title. Ever.

What it means in practice is that my role has effectively been split into two, and there is going to be another role at the same level with responsibility for managing the VLE. The team is also being split, and I’ll have two people working on learning materials with the third learning technologist working with the VLE coordinator. In reality there will continue to be a lot of cross working within the team, especially until the VLE coordinator is appointed, but I’m positive about the possibilities the new structure offers. I can make something of this new position both for myself, to push my career in the right direction, and for the university to support our drive into new areas of independent distance learning by working with academic teams to produce appropriate high quality, pedagogically sound content.

First session of the new semester was the odd one that has me teaching on it. The first part was delivered by the module leader and covered cognitive load theory and what implications this has on the use and design of digital learning materials. Cognitive load theory states that as learning involves effort, there are therefore limits on how much information can be processed at any one time. Sweller identified three types of effort – intrinsic, extraneous and germane. Intrinsic load is that which has to be learned, extraneous load is additional information that distracts somehow (e.g. the overuse of footnotes which requires people to flick between the body and the footnotes), and germane load which front loads some additional effort with the intention of making learning easier and more efficient in the long term. Well-designed learning materials should aim to reduce extraneous load to increase intrinsic or germane load.

My session followed this by demonstrating some content creation tools and giving examples on how they can be used to create good materials. My time was very limited so it had to be a demonstration rather than a guided hands-on session, and I included Storyline, Prezi, ThingLink, Pictochart and PowToon. Each one of these could easily have warranted a half-day session to really get into detail and this is something that we’re thinking about for next year, as the programme leader for the PG Cert and my team will both be part of a new CELT which the university is in the process of forming now. The programme leader was also in this session, primarily with their student hat on, but they were also informally observing me to give me some feedback. That was all pretty positive, saying that I was able to answer all the questions that came up calmly and confidently, which is reassuring, as I personally felt like I fluffed the PowToon part. The application has changed a lot since I last used it in earnest and I hadn’t given myself sufficient time to get used to the new version in my session preparation. I followed up the session by publishing a comprehensive range of further information and self-help resources on the module’s SunSpace site which I pointed people towards.

We are now in the final stages of preparatory work for the academic year rollover on the VLE, SunSpace. This has been a big job this year, and a difficult and somewhat stressful one for me. For the past three years at Sunderland, since we moved to LearningStudio, as part of the rollover we have copied content from the previous version of all module spaces to the new ones en masse, a process that was, compared to Blackboard, fast and effortless. However, it did have the problem of perpetuating bad practice and design. In an effort to improve the quality of module sites this year our Academic Board decided that instead of rolling over content the new sites for 2015/16 would be created from a template. Although they issued guidance on what that template should contain, exact details of how to implement this fell to me. Putting something together that made everyone ‘happy’ was not a joy.

The end result is, I think, a considerable improvement on the template that was used in previous years for new modules, but I would have liked to have done so much more with it. There are two distinct parts to the new template. First of all there are placeholder items for all of the items that Academic Board specified should be in the template and these contain information and guidance to help academics update them. Secondly there is a hugely expanded section for staff help, and a new section for student help that is almost as large. The design is very basic, deliberately so, as I didn’t want content that academics create to not match the set items that were pre-prepared, and realistically most will only use the basic functionality. However, there are some items in there that are designed to either help academics improve the visual appearance of their modules, such as some generic icons, and others that show-off what can be done in SunSpace such as a collapsable accordion menu and embedded content items including content from our streaming media server and external sources such as ThingLink.

One final thing we did was to turn off, by default, all of the tools which don’t work as they should for one reason or another. I was able to get consensus from the team on this one. They are all still there if people really want to use them, but we hope they won’t. In the staff help section there is a page dedicated to the various SunSpace tools where I have explained why these particular ones are turned off and advising people on what to use instead to achieve the same ends in a better way.

To support staff with the changes to the rollover process I have also arranged a training and publicity programme that includes emails, announcements, an article on the University’s blog, US Online, and a series of workshops supported by roaming sessions that will run over the next couple of weeks, to be repeated again at the start of September.