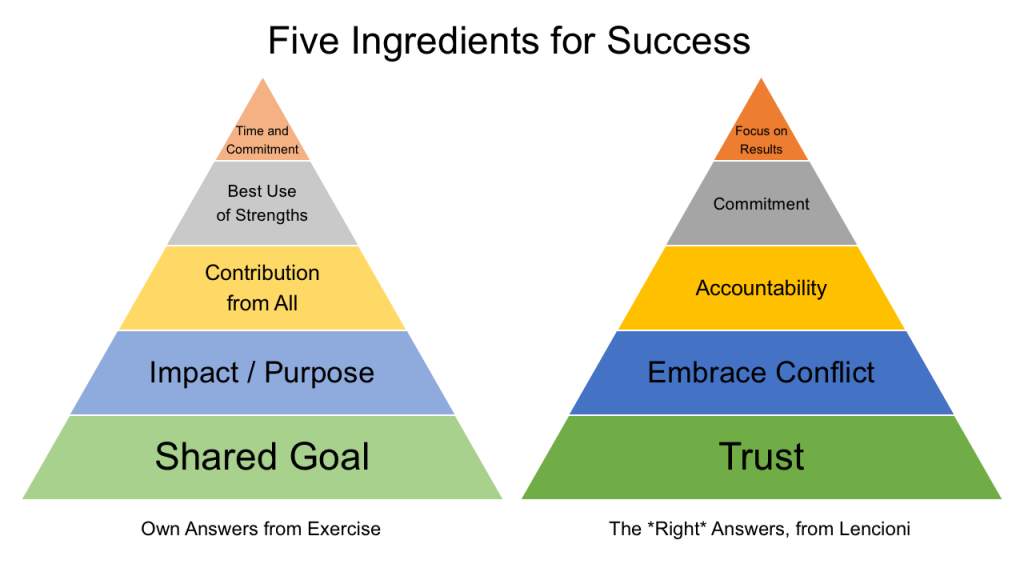 This session began with a reflective exercise on how you have changed since the start of the course and what you have learned which we then shared in small groups. For me, I’ve learned to be comfortable with the idea that leading is a skill that has to be learned and practiced just like any other, and therefore that it is something which can be developed and improved upon. More practically I’ve learned the value in finding solutions collaboratively, as a team, leading them to solutions rather than providing them.

For example, a little while ago I asked the team if they could clear out the backlog of emails in the team mail account, twice, and it didn’t happen. On the third occasion, using things I had learned on the coaching sessions of this course, I asked them how we could clear out the backlog, from which we agreed an approach, a time to do it was set aside, and this time it was done. On another occasion I used the presence of a work experience student to prompt one of my team into completing some administration tasks on one of our systems. I had in mind that that they would teach the work experience student to do the task, but actually, in thinking about how to do it, they ended up doing it themselves. Some long outstanding tasks were completed in a very short time and our work experience student was freed up for other tasks, a win for all. In our group discussion on this exercise I was pleasantly surprised to have fed back to me that my team has notably improved since I joined, that the office is a more pleasant and positive environment, and that the team are more visible and approachable.

The second part of the morning was built around Patrick Lencioni’s concept of the five dysfunctions of a team. This was introduced via a group exercise in which we were asked to work in pairs and come up with the five most important ingredients for success. My partner and I answered:

Wrapped around this we also mentioned the need for trust and respect, but Rob wouldn’t allow that! There is a correct answer to this exercise according to Lencioni, a reversal of his five dysfunctions:

The need for a leader to be trusted by their team and to be seen to be following through on what they have said they will do, is, I think, the most important thing that I’m going to take away from this exercise. I have a couple of difficult outstanding jobs to benefit the team that have been mentally parked for a while, I now realise that these need to be picked up and resolved soon.

In the afternoon we were tasked with three more reflective exercises relating to self-development. The first was about concentration, asking when we feel ‘most present’ and ‘most distracted’ at work. For me, I am most present when creating something, a presentation or a web page for example, that uses my technical and creative skills but pushes me a little further than I’ve gone before, so slightly outside of my comfort zone. When I’m most distracted it’s due to competing demands on my attention, having to juggle tasks or being distracted by phones, notifications or office bustle.

The second exercise was about reflecting on where you were in life ten years ago, how you have developed since, and where you are going to be in ten years’ time. That was an enlightening one that made me think. Ten years ago I was a very different person, still trying to find a sense of self, lacking confidence and self-esteem, and still in the very early days of a nascent IT career. Ten years from now seems a very long way away, but well before then I’m going to need to decide on my next career move, whether I go into senior management or cross the academic divide. A doctorate is a distinct possibility having done so well with my master’s dissertation. Alternatively, I’ve always wanted to learn to play the piano but never had time, and to master a martial art. Both of which are objectives in progress.

The final exercise was designed to tie in self-reflection on personal development with that of team development by asking us to think about when we have felt most a part of a team, and most separate from a team. For me, the former was when I was in LTech at Northumbria University. There I felt particularly embedded within the team. We all had a common goal and knew what our purpose was, and we were led by a strong, very intelligent and knowledgeable leader who trusted us to get our work done. I can now see that he was using a devolved, coaching style with us. I won’t name the team where I didn’t fit. It was a team I didn’t chose to join, but was forced into by command from management who didn’t understand my skills and experience. Very much a square peg / round hole situation. I didn’t stay. Although I got on well with my other team members, I had no faith in the management of the department. Like research has shown, it was my managers and the poisonous organisational culture that I left, not the job.