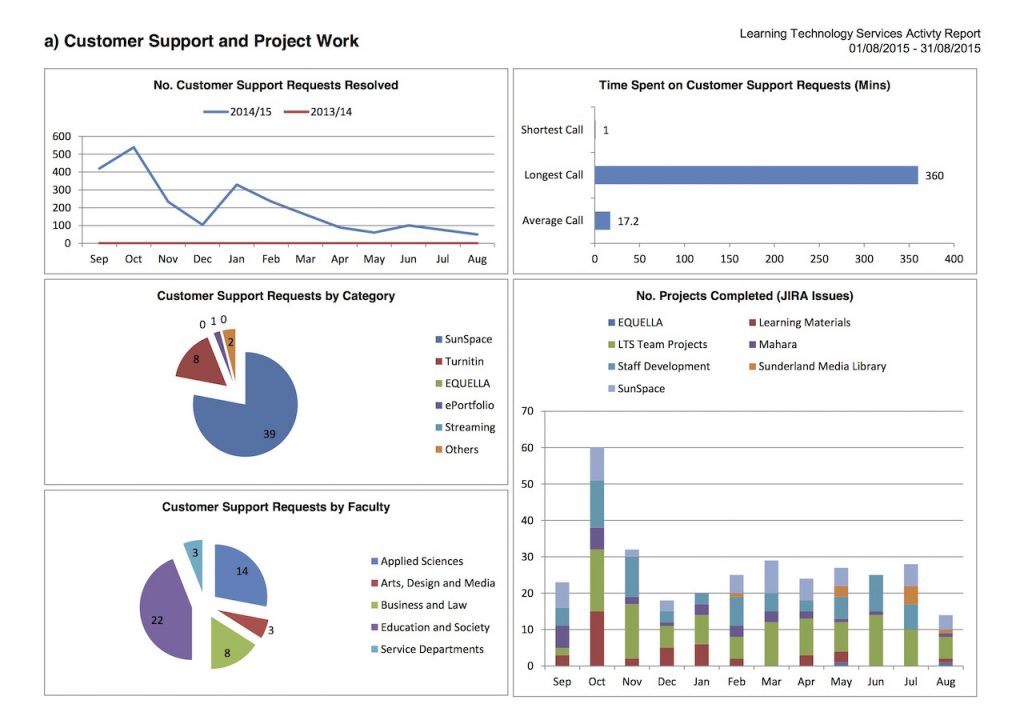 Attended a webinar which demonstrated new and improved features of EQUELLA 6.4 and provisional plans for the next major release, version 7. It was useful as we are a few versions behind. Some notable new things include the gallery view for items tagged as images or videos, additional options for administrators to control number of attachments allowed per item and, in the case of images, the ability to restrict the size of images (dimensions, not file size), new MIME type restrictions, and myriad improvements to the way search, sorting and filtering works.

Also demonstrated was the new ‘Push to LMS’ feature and improvements to LTI integrations making it easier to configure EQUELLA integration into Blackboard and Moodle. When we asked if these features were going to be developed for LearningStudio we were told that there were no plans for this due to lack of demand. I find it more than a touch worrying that one part of Pearson is providing better support for Pearson’s competitors than their own LMS platform. What are we to conclude about Pearson’s commitment to LearningStudio from this?

In conversation with a colleague in Academic Development about how to target new starters and make them aware of all the fabulous tools and services we have to offer, we came up with the idea of having short, one-page ‘quick start’ guides for each of our core tools which would provide an introduction, explain what it was and how it could help, how to access and where to find more detailed information. I wrote the ones on Equella, Turnitin and ClassLive (Blackboard Collaborate) myself, and edited the others to a greater or lesser extent to make the style and content match across the range.

An interesting first for me today, I hired someone. We had an intern vacancy in the team for the next six months to assist with customer support during our busy period and then to help with the upgrades to Mahara and Equella. This was all approved and most of the paperwork done some time ago, before I was even in post, but the final tasks were assigned to me which included liaising with the Intern Factory, advertising, selection and defining the interview questions and procedures.

I had a crash course on recruitment and selection on Thursday in time for the interviews on Friday afternoon. We interviewed three people, all of whom could have done the job, but one who had just a bit more experience and gave a slightly better interview, so I feel really sorry for the other two.

This will also be my first official experience with line managing someone, as opposed to just supervising, though I was responsible for an agency worker we had in for three weeks last month for a specific task.

Sunderland After a Month

Well, I have now worked for the University of Sunderland for a month so I think it is a good time to step back a moment and reflect on how I’m finding it and what I think of all the systems and services which are new, or not so new to me.

The most striking difference for me is the culture which is open and receptive to ideas, thoughts and opinions. I think I, and the team are very fortunate to be based in the same building as the service director as she is very approachable about all issues, trivial and major, and that is something which I haven’t experienced for a long time. Everyone at the University seems to be happy. Even the unhappy people are still pretty happy, their unhappiness compartmentalised, and this is reflected in, if I recall from my induction correctly, a 96% satisfaction rate in the latest staff survey. There is a great deal of trust and respect, everyone seems to have their heads down doing good work, and I find that there is a genuine desire to keep students at the heart of everything we do, even if it means creating extra work for ourselves. The two campuses in Sunderland are both excellent, very smart and professional. The London campus also looks good and I hope to get the chance to pop down there at some point.

The big one. The VLE. All over IT you see a dichotomy, two big players doing similar things or selling similar products but coming from different cultures – Linux and Windows, Apple and Microsoft, iOS and Android – around which are clustered a number of others either trying to break in, offering a niche or which are fallen stars. The VLE market is no different, and so we have Blackboard and Moodle. When Sunderland reviewed their VLE provider a couple of years ago they, however, took the brave decision to go with something different and chose Pearson Learning Studio, formerly eCollege and branded internally as SunSpace.

Learning Studio is provided as a software-as-a-service model; at Northumbria we self-hosted Blackboard so it is a completely new experience for me. The plus side to that is that we are largely unaffected by the performance problems which plagued Blackboard and which on occasion drove me to the edge of sanity, but of course Learning Studio has it’s own issues. The core functionality is pretty good, but there are a lot of features which I am used to and which I think are reasonably standard that are simply missing. Customisation is also very limited because every institution which uses Learning Studio is using the same Learning Studio, so for example we once asked for a default setting to be changed which was done, but the next day it had been reverted because other universities didn’t want it that way and I guess they had more clout. Using it as an administrator or academic can be a little clunky at times due to some questionable UI design, but for the most part, and for students, it is not bad at all. Overall, and from my perspective, it’s a definite improvement.

Another Pearson product which we purchased alongside Learning Studio, Equella is a content repository which links into Learning Studio fairly seamlessly. I like Equella too for the most part, it is a very polished nice looking application and unlike Learning Studio it is self-hosted which gives us complete control of the application and content. That, of course, has its drawbacks too and our installation can be frustratingly slow at times which makes me wonder if it needs some optimisation or improved hardware. Something for my to-do list.

Also like Learning Studio there are some usability issues. After you have finished contributing a new item the ‘Save’ button is the wrong place, in the top-right, instead of being on the bottom-right where the next button has been on the previous screens. When contributing an item there are three screens of information to be completed, but the second two screens – Classification and Format – would seem to be redundant as the information you can enter there doesn’t seem to be used anywhere. There is no advanced search functionality, for example, which would allow someone to search for only files tagged as a specific type or format. What is worse is that none of the fields on these two screens are required, but you cannot skip them and just press ‘Save’ after entering information on the first screen, you are forced to skip through them. I still have to work through the Equella training materials in detail though, so perhaps these are mysteries that will resolve themselves.

It doesn’t seem to be being used a lot at the present time which is a shame, as it makes it very easy to add complex items into Learning Studio such as the package files produced by Storyline. It is also great for any materials which you want on multiple locations, help guides to go into Learning Studio and on the website for example, as you can then just update the material in Equella and the content in the module and on the website is updated to the latest version automatically. Like the Content Collection system in Blackboard, but much more versatile as it is not tied into the VLE alone.

These systems were nice surprises. JIRA is a project management and service desk application which I am loving, and Confluence is a wiki solution which we are using to host our intranet and a team knowledge base. Both products are from Atlassian – https://www.atlassian.com/ – and integrate seamlessly with each other.

There are lots of other applications we are using which I have had demonstrations off but not yet had the chance to evaluate in any great detail. Mahara is our ePortfolio solution, Helix Media Library is being used to run our streaming media server which is an application I have known about by good reputation for some time, and our public website is powered by TERMINALFOUR. There are a few old faces here too, SITS is chugging along in the background powering all the student data, Turnitin is available as an assignment option and even good old Blackboard Collaborate is available within SunSpace under the pseudonym of ClassLive.