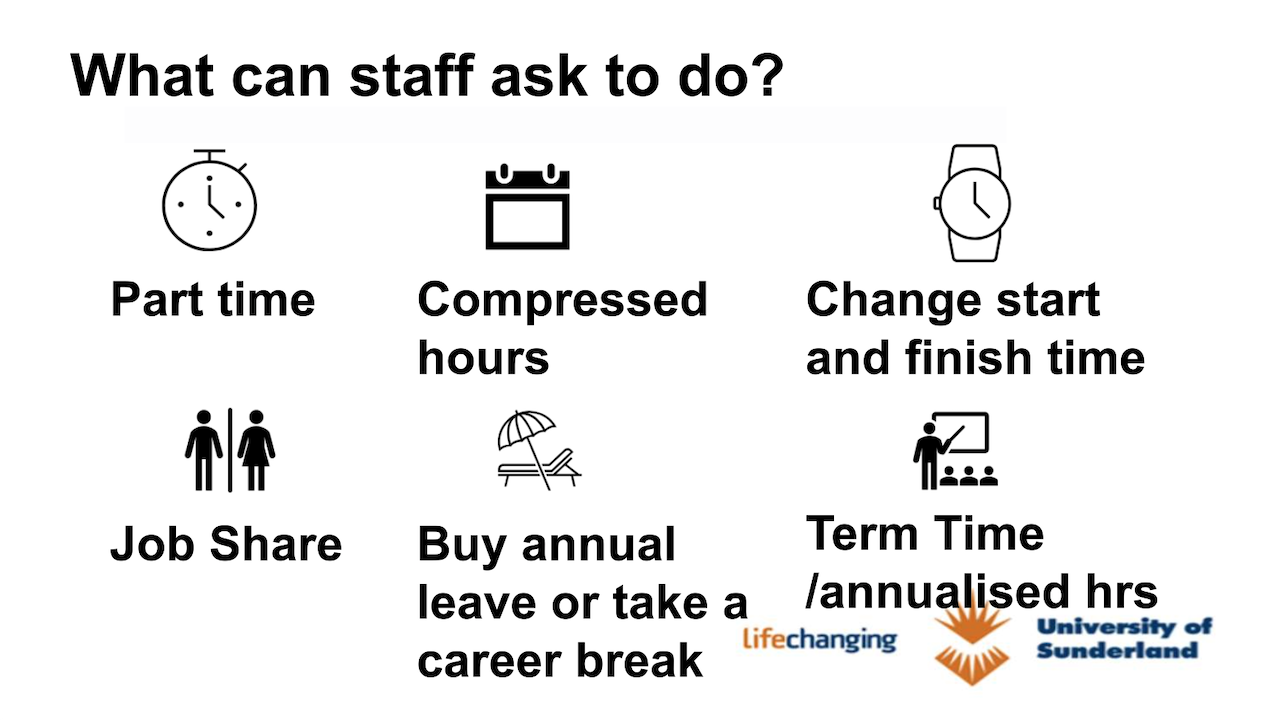 Attending some HR training today on the University’s new Flex Select work scheme, but which also covered flexible working in general. Flex Select is a new scheme that has been launched to – and everyone’s being very honest about this – save money in these hard Covid times, and is set to run for the next 12 months. The scheme is designed to enable staff to request more flexible working, such as reducing their hours, without having to go through the old, more formal flexible working policy which was drafted with flexible working legislation in mind. Given the workload of myself and the team, I doubt there will be anyone who can work fewer hours! But in pre-Covid times I did have one of my team move onto compressed hours, 37 over 4, which had to be managed carefully within the team.

Nevertheless, it’s good to be up to speed with these things, and I got a lot from the session. It’s good that the University is trying to change its culture a little. Of course practically the whole university was forced into a remote working when the lockdown began in March, and now with some people going back on a hybrid model, managers are being asked to have a ‘default yes’ position to requests under Flex Select, and to consider all requests with an open mind, considering other options where appropriate. I did not know, for example, that buying extra annual leave is often a better option than reducing hours because it doesn’t affect your pension and no contract changes are required.

Apart from Flex Select, I learned a lot more about the differences between our other various options, including buying annual leave, job sharing, career breaks, and phased retirement (popular with academics). I also learned, to the surprise of no-one, that flexible working is vastly more popular with women and people on lower salary bands. (Grumble, destroy the patriarchy.)

It’ll be interesting to see how many of these changes are kept, and how much of a cultural shift will be permanent when we get on top of the pandemic; a very big question a lot of people will be asking.

In Defence of the Open University

While every university claims to be unique and special, the Open University truly stands out. The OU alone accepts students regardless of prior qualifications and at any time of life, and until recently was fairly unique in providing all of its courses as part time, distance learning, allowing students to get a university level education while balancing work and family life. It is one of those unique, fabulous, and brave institutions that define our country, and it’s my alma mater, so seeing what’s been happing over the past few months and years has been particularly hurtful.

I’m one of the hundreds of thousands of people the OU’s given a second change to, having had to leave school at 15 before completing my Highers. When I started to put my life back together in my early twenties one of the first and best things I did was start studying again through the OU, moving from 10 credit ‘Openings’ courses to undergraduate diploma, degree, and finally Masters in 2016. Over ten years of study, all part time while working full time, and paying for each course as it went, avoiding debt. This was only possible because I was able to squeak in the completion of my undergraduate degree before the 2012 changes to student fees.

That change, which trebled student ‘top-up’ fees to £9,000 per year was disastrous for the Open University in particular, and part time study in general, because it was founded on the premise of full time study for people leaving school. The needs of part time learners and mature students were largely ignored. The government complacently claimed that it would be fine as part time students were for the first time being given access to loans via the Student Loans Company on the same basis as full time students, but they were warned that this wouldn’t be the case; that part time and mature students would be more averse to acquiring such a huge debt burden due to other responsibilities – their homes and families.

Furthermore, an earlier change made in 2007, under a Labour government shamefully, withdrew funding from students studying for a second degree at the same level, making it much harder for people to retrain and change careers later in life. This was another group of students whom the OU excelled at supporting.

The result of this has been utterly and depressingly predictable. Part time study across the UK has plummeted with the Open University taking a particularly heavy hit. This is in turn having a massive impact on their revenue, staff and programmes have been cut in response, and student satisfaction is diving. The former Vice-chancellor, Peter Horrocks, had to resign earlier in April following a failed attempt at making further cuts and an unfortunate and distasteful comment about the nature of OU lecturers’ work. That remark aside, it’s a little harsh to blame Peter Horrocks for the OU’s current woes. He was, after all, only attempting to save the institution as best he thought he could in the face of government policy and the marketisation agenda.

The government’s hand-wringing response to this situation is laughable, with no acknowledgement that it is their own policies that have directly brought about this situation. The fee review announced in February fails, once again, to consider the needs of part time students so it’s hard to imagine how it will resolve anything. The review seems to be in response to Labour’s pledge to scrap tuition fees, something that a Conservative government could never possibly do. The review is unlikely to accomplish anything other than tinkering at the edges, possibly introducing subject variable fees which will likely result in the further devaluing of the already heavily hit humanities. After all, no Tory government wants a well-educated and critically thinking population who might question them.

I think optimistically the best result for the Open University now is for it to be recognised as the uniquely valuable institution it is, and that a separate method of funding is made available to it. On a larger scale, it would be wonderful, even if it is wishful thinking, to pause and challenge the neoliberal dogma that the free market is the solution to all problems. A university education, and a well educated society has its own intrinsic value. For more thoughts on how the OU could be saved, see Mark Brandon, Joe Smith and Martin Weller’s blog post in Times Higher Education.