“a stimulating thesis which was a genuine pleasure to read.”

How’s that for feedback!?

No, my dissertation did not pass, it passed with merit. All the hard work paid off. Fantastic. 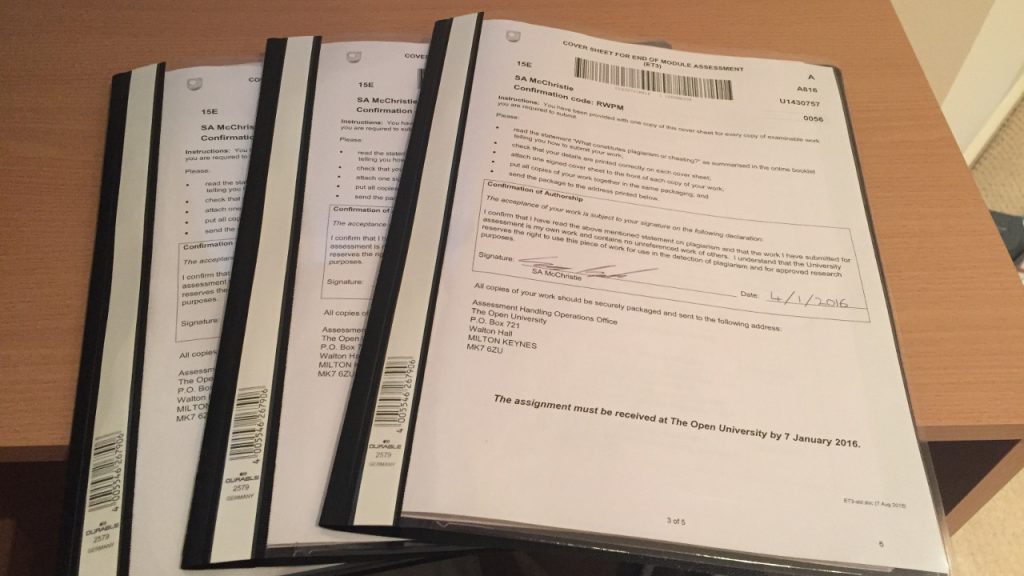 "Crushed by Authority: Abjection and Oppression in Kafka’s The Metamorphosis, The Trial and Orwell’s Nineteen Eighty-Four"

This is my dissertation, submitted for the degree of MA English. 3 copies, around 60 pages, maybe 15,000 words or so in total.

The culmination of a year’s work of my life. A year spent reading and researching Kafka, Orwell and Kristeva. I used pretty much my entire allowance of holiday to take December off to finish writing this thing. It was a frantic and stressful month. This past week has been insane. The past 48 hours… well…

Today was the final day for me to mail it in on time and yesterday turned into an all-nighter. Been a long time since I had to pull one of those. I haven’t slept since I got up at 8:30 yesterday morning. I’m utterly done in.

And now it’s over. Submitted. And I have in front of me around two months of purgatory before I find out if it’s a pass. Part of me doesn’t care. I look at all the hard work that’s gone into this and I’m proud of it. It is a thing of beauty. In a day or two, when I feel human again, I’ll even print off another copy to go on my book shelf.

Keen-eyed observers will note the new CMALT page on my blog. My portfolio is now three years old and due for review as per ALT’s new guidelines which have come into effect this year. I had assumed that my portfolio would need to be reviewed first before my membership could, or would be renewed, but I’ve just found out today that the review process is actually still in pilot.

In any case, in preparation for this, and as a first step, I have converted my original portfolio from 2012 from a Word document to a webpage hosted here. In doing so I have changed no content whatsoever as it is a historical document, but I have removed the guidance notes and instructions which formed a part of the Word proforma and removed the need for the appendix of evidence by creating inline links to the evidence, all of which is also now hosted on this site.

I did consider using Google Sites or creating the portfolio in Mahara, but I don’t like the results of content produced using Google Sites and both of these options restrict my freedom in different ways. Part of the benefit of having this website is that I have complete control and freedom to do what I want and have no concerns about access in the future. Interestingly, in 2012 I hosted all of my evidence in my personal Content Collection area in Northumbria’s Blackboard and I have found that everything still works, even though presumably my IT account has long since been deleted. Nevertheless, it will all disappear at some point. A further reason for hosting my CMALT portfolio here is because I have known about the need for this review for some time and built my blog with this in mind, and I anticipate that I will be citing many of the posts as evidence. I have presented the portfolio as a flat page rather than creating sub-pages for each section as it matches the design of my other pages and because I am a fan of flat, minimalistic design and navigation. My concession to the fact that it is a large piece of work has been to create an internal navigation menu at the top of the page and included links back to this after each section.

The next step will be to complete the new review sections but I will wait for guidance from ALT on when this is going to be due rather than ploughing ahead. I have however created the required headings and placeholder text based on the guidance documents that have been published on ALT’s website as I think they are unlikely to change much now.