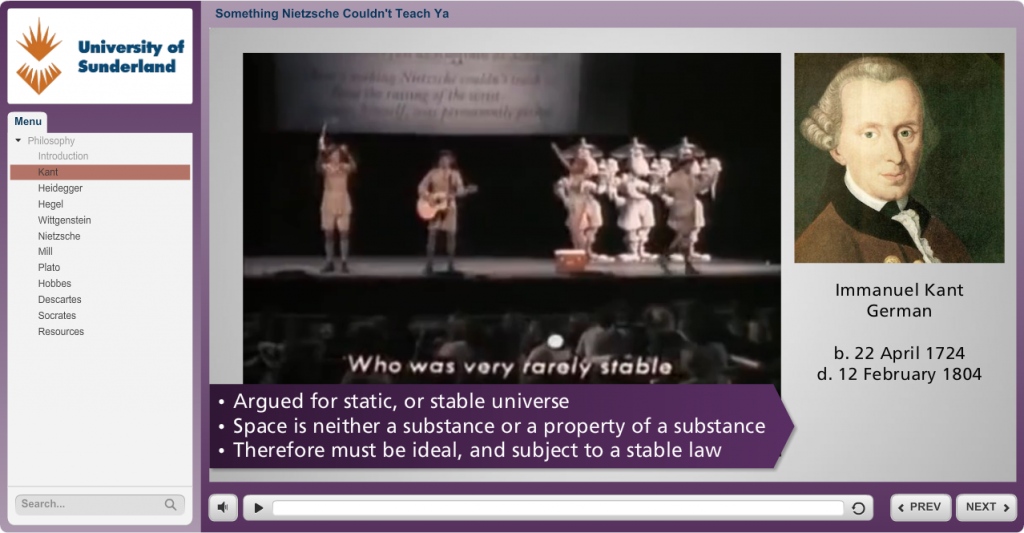 And so we come to the infamous peer teach session! In which we were each given seven minutes to teach on anything we wanted by whatever means we desired, followed by seven minutes of questions and answers, not about the content so much as observations about our teaching style.

Some interesting topics and techniques as you can imagine, from the health benefits of juicing with taste testing, to a presentation on everything you would ever want to know about the Fender Stratocaster. I taught some philosophy, in a session I called ‘Something Nietzsche Couldn’t Teach Ya: A potted history of Western philosophy from 470 BCE to (almost) the present day … Via the medium of song!’

I created a presentation using Storyline that took Monty Python’s Bruces’ Philosophers’ Song and added breaks after each philosopher was introduced in which to talk about their key contributions. In the presentation itself I had some bullet points fly in along with displaying some basic biographical information. It was well received, and I was able to field all the questions I got, though sometimes with reference to the notes I had prepared as there are things in the song which I haven’t studied.

One little thing I did struggle with was time management. The seven minute format was chosen for a reason, to see how well you can manage your topic into the available space. Though the song is very short, I had about a minute of content for each philosopher which took me over. Anticipating this, when I received my six minute warning I was ready to skip to the end and the final slide which I wanted to leave people with – about Socrates decrying modern technology! Watch the full presentation here if you wish.