HR and SLS, which uses a slightly modified approach, have recently revised the university’s appraisal scheme and documentation to try and make it more guided and to encourage reflection in the appraisee. This workshop was to discuss those changes and share best practice across the service.

Also covered in detail were your own responsibilities as a manager for ensuring that the process was a success, from logistics such as room booking and setting aside adequate time for both yourself and the people you are appraising, to how to guide the discussion by asking effective questions and how to identify suitable objectives for the coming year which map into departmental and service level objectives. The discussion we had around effective questioning was particularly useful, as it neatly ties in with the work I have been doing on the Leading from the Middle course, particularly the sessions on coaching.

Following on from our earlier demonstration, Pearson have now set-up and released the first LearningStudio to Zapier integration for us to experiment with, a new course announcement trigger. I volunteered to run through the set up instructions provided and test. While it works well enough from a technical point of view, set-up is far from straight forward and it needs a lot of work before it could be rolled out to end users.

The Zapier side of things is fine, but to get the LearningStudio integration working you need to provide a course ID and that’s going to be a problem because it is not the University’s course ID, but a long sequential number generated by the platform, like a primary key, which you have to grab from the URL of the course home page. That’s do-able with good, clear instructions, but the second problem is that you need to authenticate with a username and password which, again, is not the University’s Active Directory account, but an internal password held in LearningStudio which is normally overridden by single sign-on. So, that means that anyone who wants to use LearningStudio integrations on Zapier would need to contact the team and have us reset their internal password and give it to them (heavy admin burden), or we need to find a way to get single sign-on working within Zapier’s authentication (technical challenge which may not be possible).

There are other issues. I don’t mean to be negative, what Zapier does is very useful and has a great deal of potential, but I think it is the wrong platform when compared with its principal rival, If This Then That. But that’s a moot point because Pearson have made the choice for us on the grounds that Zapier supports more enterprise integrations. I found this great blog post comparing the two platforms. If we, in higher education rather than a corporate environment, want to get students to engage with this, IFTTT’s greater support for web and social media integrations makes it the better platform in my opinion. The blog post is from 2014 though, and Zapier has improved. Support for WordPress has been added, with Blogger and Android listed as coming soon, but it’s still missing other popular services such as Flickr and Facebook Groups, and there is no indication of iOS support being forthcoming.

Licensing is also going to be an issue with Zapier. The free account limits you to 5 Zaps and 100 events per month. I used two of my Zaps just to test course announcements being pushed to email and OneNote, for just one course site.

Had a demonstration of Zapier today from a Pearson rep from their developers network. Zapier is a service that allows web services from different platforms to talk to each other, but in a very simple visual manner – no programming skills required. So, for example, you could set a new direct message alert from Twitter (the trigger) to send you an email to your Gmail account (the action). Triggers and actions can be chained together to create complex sets of actions. You could add a second part to my example which adds an entry to a Google Sheets spreadsheet from the Twitter DM as well for example. The possibilities are huge, and every modern web service you can probably think of is available on Zapier.

If this sounds like If This Then That that’s because it is pretty much the same, though Zapier claims to have more integrations available. Why Zapier then? Because Pearson have chosen Zapier to experiment with by linking up the web services which are available from LearningStudio to Zapier. You won’t find that advertised on Zapier though, as they are set to private at the moment, but we will be able to use them and can send them on to others. We could, for example, create a ‘Zap’ that sends an email whenever a new announcement is posted in a course site. We’re still waiting for full details of what the 17 triggers are, and there are no actions, so unfortunately this is going to be a one way thing; no possibility of setting a Facebook post to be pushed into a discussion board thread for example.

A short update from the Director and Assistant Directors of SLS on how we are progressing towards meeting our targets as a service which, as we are nearing the end of the three year service plan, has largely become a statement of fact. This was followed by group workshops where we discussed some examples of how we are meeting our shared behaviours: Teamwork, Customer Satisfaction, Continuous Improvement, Customer Focus and Information Sharing.

Implementation of ITIL in Helpdesk Software

Had a short internal training session from a colleague in IT Support on how they have implemented ITIL best practice into the University’s helpdesk / customer support system, a customised version of SCSM (Microsoft System Center Service Manager). Of particular interest was their ‘prioritisation matrix’ on how to categorise calls and assign an SLA to them as I can use this to inform development of our own systems and processes for managing customer support within the team. 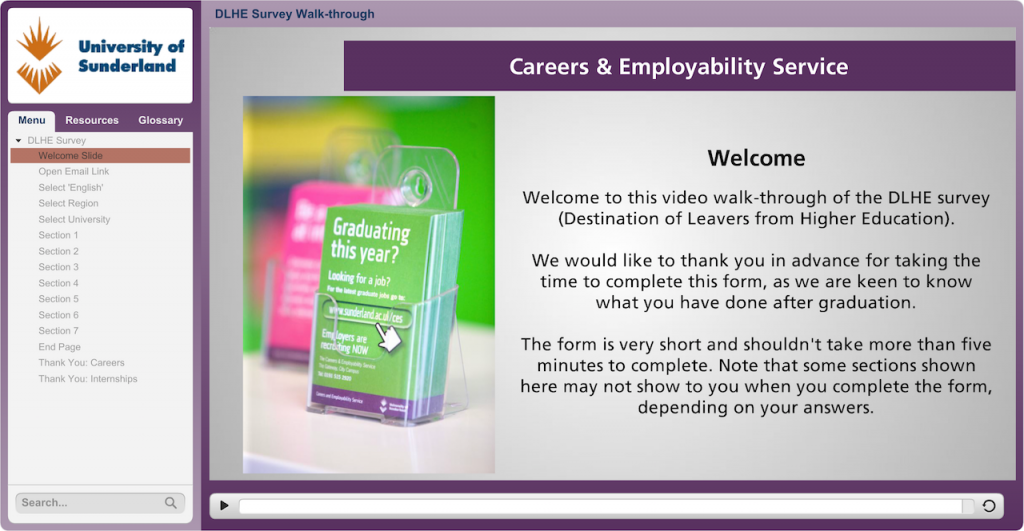 The Destination of Leavers from Higher Education survey has become a crucial part of university rankings and, with all surveys, there is a correlation between positive results and the numbers completing the survey. Analytics over the past few years at Sunderland have shown that we have a significant percentage of people who start the survey but don’t complete it. To help improve this our Careers and Employability Service asked me to create a video walk-through of the survey showing people what it looks like and how long it takes to complete. This was building on earlier work I’ve done for Careers using Storyline which has been very well received.